The border crossing into Nicaragua at Los Manos was a bit hectic, but we made it through the border in just under 2 hours and made it to Estelí before dark. We decided to stay at a hostel that night so we could use the internet to make plans for the rest of our time in Nicaragua. We stayed at a popular backpackers hostel  (El Luna Hostel International) near the square that had an amazing café (Café Luz) across the street with fantastic veggie burgers (Yum!).  Although we did not spend much time exploring Estelí, it seems like a cute town and there are a good selection of healthy foods and groceries available.

Our next stop in Nicaragua was Reserva El Jaguar located of few kilometers outside of San Rafael del Norte in the Caribbean foothills. On the way to the reserve we took the back road and enjoyed a picnic lunch along the roadside and even managed to spot a Rock Wren singing roadside, a species not frequently encountered in Nicaragua. This particular Rock Wren is a subspecies that has more barring on the chest and is a bit darker overall.

Reserva El Jaguar is a private reserve and coffee finca run by a wonderfully kind couple who also happen to be two of the most active birders and conservationists in Nicaragua, Lili and Georges Duriaux – Chavarría. 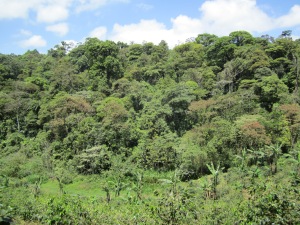 Reserva el Jaguar with coffee and bananas in the foreground

They also produce excellent bird friendly coffee that is certified by Rainforest Alliance. Their coffee is sold directly to Whole Foods Market in the U.S. Next time you are shopping for coffee look for Café el Jaguar from Nicaragua at Whole Foods, it’s worth it! In addition to producing coffee they protect 240 acres of primary foothill forest. The bird diversity at this middle elevation is staggering. Two-hundred and ninety-one species have been reported on the reserve, four which were previously not known to occur in Nicaragua prior to bird surveys that the Duriaux’s have conducted.  The Duriaux’s are ardent conservationists, working with their neighbors on reforestation projects and trying to relink the remnant patches of forest to create corridors in their area, as well as provide wintering habitat for Golden-winged Warblers. They also provide endless amounts of information on the birds in Nicaragua. When we visited the reserve Lili was in Costa Rica for a species assessment workshop and Georges was busy preparing for a 15 day banding, surveying, and birding expedition into the remotest parts of the Bosawas Biosphere Reserve.

The forest at Reserva el Jaguar

El Jaguar is a magical place, combining Pacific and Caribbean species from the lowlands, the foothills and cloud forest. At 1400 meters elevation with this interesting mixture of species, you never know what to expect. We spent 2 full days birding the trails through the reserve and found Slaty Antwrens in mixed flocks with Spotted Woodcreepers, Red-crowned Ant-Tanagers, Common Chlorospingus, Olive-backed Euphonia, Dusky Antbird and Blue-crowned Chlorophonia. Highland and cloud forest birds such as Highland Guan, Slate-colored Solitaire, White-faced Quail-Dove, and Black-headed Nightingale-Thrush are common and are side by side with lowland species such as Thicket Tinamou, Tawny-winged Wood-creeper, Black-faced Antthrush, and Buff-throated Foliage-Gleaner which are all also common at the reserve. Other highlights at El Jaguar included Rufuous-winged Tanager, Emerald-chinned Hummingbird, two different Scaled Antpitta, Green-breasted Mountain-Gem, and a Pheasant Cuckoo who flew down the road and nearly hit Josh while we were walking down the road. We also saw and got a good recording of a Buffy-crowned Wood-Partridge, potentially a first for the reserve. In addition to the great tropical species we saw several Neotropical migrants including Golden-winged Warbler, Canada Warbler, Tennessee Warbler, Kentucky Warbler, Black-and-White Warbler, and Wilson’s Warbler happily foraging in the shade trees above the coffee. Despite incessant wind while we were at El Jaguar, by staying in the forested ravines we were able to make a number of good recordings. It’s always nice to be in a place that is quite and away from the omnipresent chickens, dogs, radios and chainsaws to make recordings.  El Jaguar is also a great spot to see the Three-wattled Bellbird, a spectacularly goofy looking bird that makes some of the strangest and loudest calls of any bird. Unfortunately, we were a bit early to in the breeding season to hear or see any of these great birds calling from their canopy-top perches. (Full eBird lists Day 1 and Day 2 ).

We owe a huge debt of gratitude to Georges and Lili for giving us the opportunity to visit their reserve and for sharing so much information with us. We had an incredible time. If you would like to visit the reserve, they have cabins available for rent and more information can be found on their website.

Copyright © 2021 Create a free website or blog at WordPress.com.