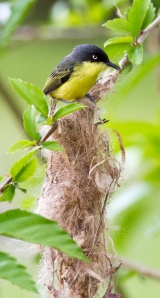 Common Tody-Flycatcher and the nest-zaster in progress.

Kathi needed to work a bit so we ended up staying at a very cute, veggie-oriented, very friendly hostel called Essence Arenal in El Castillo for a couple of nights. The hostel backs onto a nice forested canyon and you can bird a track through the canyon where some casual birding actually turned up some pretty good birds, including Slaty Spinetail, Thicket Antpitta (heard), Buff-rumped Warbler, Rufous Motmot, Broad-billed Motmot, Bay-headed Tanager, Slaty-capped Flycatcher, Buff-throated Foliage-Gleaner, Smoky-brown Woodpecker, Purple-crowned Fairy, and Yellow-billed Cacique. After Kathi finished working on a paper and we were ready to get back to the birds, we spent a fairly full day birding the trails of Arenal Observatory Lodge. We had intermittent rain in the morning and ended up rained out by midafternoon but it was still a nice birding destination. While you can get great birds from the road into the lodge and other roads in the area, the ability to bird narrower trails that have views into the understory makes this the best place around to actually see Thicket Antpitta. We birded the trails behind the lodge and the waterfall trail. With a bit of perseverance and some sneaking into the forest (sometimes rain and the noise it makes really helps you sneak into the forest after a skulky bird, whereas in dry weather you’d make far too much noise and have no chance) we got amazing views of a singing Thicket Antpitta who performed for us for several minutes. Antipitta’s are some of the coolest birds around! Not only are they adorable tail-less balls of feathers but when they sing their entire belly rises and falls with every breath. Beyond the Thicket Antpitta, we had great looks at Great Curassow and some skulkers like Dull-mantled Antbird, Stripe-breasted Wren, Black-headed Nightingale-Thrush, Buff-throated Foliage-Gleaner, as well as Carmiol’s Tanager, Brown Violetear, Spotted Antbird, Ocellated Antbird, Bicolored Antbird, Smoky-brown Woodpecker, Slaty-capped Flycatcher, Golden-winged Warbler, Nightingale Wren, Tawny-crowned Euphonia, Bronze-tailed Plumeleteer, and a juvenile Fasciated Tiger-Heron who was perched in a tree visible from the Danta Bridge at the end of the waterfall trail. The following day we birded the road that cuts back from the Arenal National Park entrance towards the Lake Arenal dam, which is sometimes called the peninsula road. We again had intermittent rain, which was never too bad and kept bird activity high. The birding on this road is amazing and activity was constant with great variety and a lot of birds. We easily logged about 100 species in a morning birding the road with the standout bird for us being a pair of White-fronted Nunbirds and other highlights like Bare-crowned Antbird, Black-throated Wren, Thicket Antpitta (heard), White-shouldered Tanager, Mourning Warbler, Yellow-billed Cacique, Great Antshrike, Rufous-winged Woodpecker, White-collared Manakin, Long-tailed Tyrant, Cinnamon Becard, Blue-throated Goldentail, Northern Barred Woodcreeper, Purple-crowned Fairy, Royal Flycatcher, Black-headed Tody-Flycatcher, Russet Antshrike, Rufous-winged Tanager, Shining Honeycreeper, Violet-headed Hummingbird, and a fantastic and unexpected surprise – great views of our first ever Anteater – a Northern Tamandua! 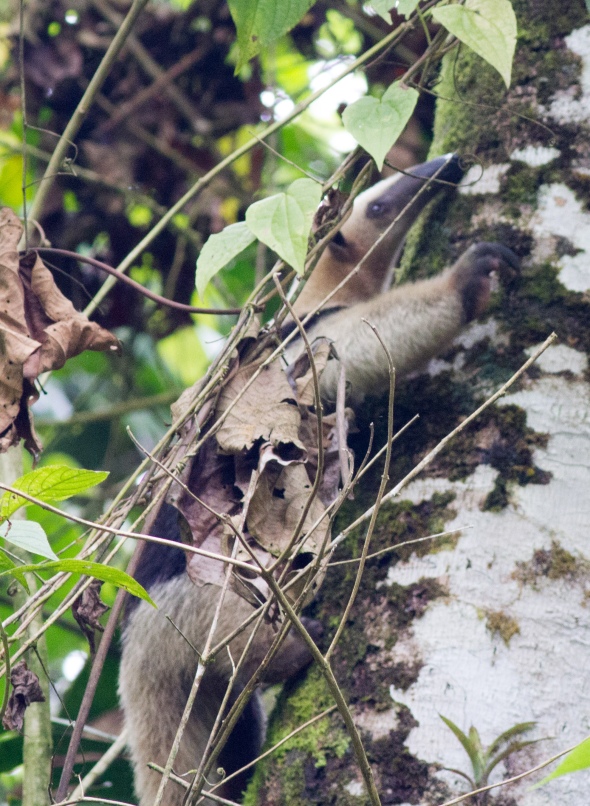 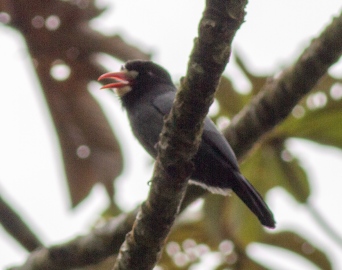 Blue-throated Goldentail. Forget the guidebook drawings, this is a more typical view! 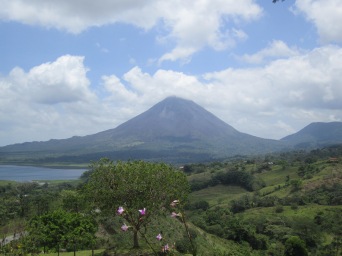 After a great morning birding the road we stopped at a scrubby wet area on the way back to camp to look for Crakes and Yellowthroats and the like. Within moments of getting out of the truck a White-throated Crake called from nearby. What followed was a bit of careful use of playback and a Crake calling from within 1-2 meters but remaining completely invisible in knee-high grass. After 20 minutes or so we gave up, not wanting to harass the bird any more, and got back in the truck. No sooner were we putting on our seatbelts than a pair of White-throated Crakes calmly walked across the road, stopping in the middle for a few moments, no more than 5 meters from the truck, giving us great if brief views!