To finish out our tour of Costa Rica we needed to check out some of the birding spots on the southern Pacific slope. We headed straight to the sleepy town of San Vito, picked up some supplies and headed toward Finca Cántaros, a small private reserve between San Vito and Las Cruces that makes a great place to camp. Finca Cántaros has a great garden with tons of Scaly-breasted Hummingbirds, Snowy-bellied Hummingbirds, Rufous-tailed Hummingbirds, and more buzzing through the garden. The trail system there is short but it’s worth an hour or two to enjoy the garden and it’s certainly worth visiting the pond a few times to check for Masked Duck. We heard that Finca Cántaros is a great place to see Masked Duck in the dry season. Since we were there in the beginning of the wet season we struck out, but we had a nice list of birds (eBird list). 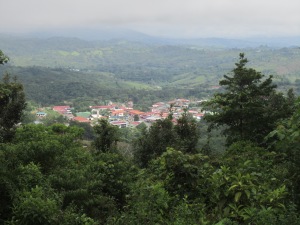 A view of San Vito taken from Finca Cántaros

The facilities at Finca Cántaros are really nice and we had the place to ourselves (although there is really only room for one vehicle). We made the Finca our home base and explored the wetlands just outside of San Vito to search of the Masked Yellowthroat as well as check out the Las Cruces Biological Station, the Wilson Botanical Garden, and Las Alturas. Looking for the Masked Yellowthroat took us some time, mainly because we could not figure out how to access the wetland where the Yellowthroat is usually seen. The access described in the bird finding guide is a little outdated and we could not access the marsh as described in the book. We made our way around the wetland looking for access points and failed to turn up any good access points or the yellowthroat. Thankfully we headed up a residential road on the east side of the wetland and found some folks to ask about access to the wetland and they pointed us to someone who would let us walk through their yard to access the wetland. We were happily granted access to the wetland and headed down to the water. We scanned the wetland for yellowthroats but found none and even tried playback but to no avail. After about a half hour of scanning Josh turned up a distant Masked Yellowthroat.  We only found this one male and didn’t get the looks or the recordings we wanted, but at least we were able to find one. Whether this is truly a Masked Yellowthroat is certainly open to debate. Apparently some studies have found it more closely linked to Olive-crowned Yellowthroat, and we subsequently heard that it certainly doesn’t respond to playback of Masked Yellowthroat from South America. It looks like it probably is a distinct species, and some guidebooks have already given it species status, calling it the Chiriqui Yellowthroat. At the wetlands we also heard a Striped Cuckoo calling and the owners of the property said the wetland is a reliable place to find them. To access the wetland, take the highway (613) that heads east out of San Vito towards the airport. Shortly after the airport you will see a wetland on the left side of the road. Take the first road on the left after the wetland (8.825517, -82.950348). The road heads up to a small residential community. Stop at the second house on the left side of the road (8.826387, -82.950011) and ask permission to access the wetland. They have had birders visit their house before so they are accustomed to requests. They did not charge us to visit the wetland, but we left them a small tip. Next on our checklist was the Costa Rican Brush-Finch which is frequently found at the Las Cruces Biological Station and Wilson Botanical Garden. As is our routine, we stopped by the station the afternoon before we wanted to visit and asked if we could get in early to look for birds. No problem they said, so we paid our entry fee and headed back to camp to cook dinner. We hit the trails early the next morning. Our first stop along the trails was the observation tower where we scanned for Turquoise Cotinga (apparently hasn’t been seen there in a few years) and Bicolored Hawk (which does make appearances in the forest patch below from time to time). No luck for us that morning so we continued along the Rio Java trail that heads through older forest to look for the Costa Rican Brush-Finch. The morning was passing quickly, but no Brush-Finch; we were starting to get worried when we heard faint chattering on the ground. We scanned the forest floor and found two Orange-billed Sparrows at first, but then also two Costa Rican Brush-Finches. We tried to record the Brush-Finches but the cicadas started calling and soon the sound was overwhelming and maddening. We waited around the area for a bit for the cicadas to die down, but being quiet was not what they had on their morning agenda. Drat, we missed recording the Costa Rican Brush-Finch and never managed to turn up another one. Later down the trail we came across an excellent mixed-species flock with Russet Antshrike, Plain Antvireo, Buff-throated Foliage-Gleaner, Red-faced Spinetail, Tawny-winged Woodcreeper, and more (eBird list). Along the trail we also found a perched Charming Hummingbird singing his heart our and were able to make excellent recordings. Hummingbirds can be hard to record, so any day with an opportunity to record a hummingbird is a good day. While in the San Vito area we decided to check out Las Alturas, which is described in good detail in the Bird Finding Guide to Costa Rica.

View of the forest at Las Alturas

The species list for Las Alturas in the Bird Finding Guide is mouth-watering… Turquoise Cotinga, Bicolored Hawk, Black-and-White Hawk Eagle, Solitary Eagle, Three-wattled Bellbird, White-crested Coquette, and so many more. We headed up to Las Alturas early in the morning birding along the road as we went. Las Alturas is a private working ranch where approximately 80 families live in sort of a private community. However, much of the forest surrounding the ranch is protected and a large portion is being reforested. The birding at Las Alturas is along the roads that crisscross the ranch, but there is never any traffic and the birding is really great! We saw 104 species in what was honestly a fairly casual birding day, including some real gems; Three-wattled Bellbird, Olivaceous Piculet, Bicolored Antbird (at an ant swarm), Speckled Tanager, Black-faced Antthrush, Ruddy Woodcreeper, and more (eBird list). We also stumbled across what most likely were a pair of Black-tailed Flycatchers. We heard a soft call that was similar to the Sulphur-rumped Flycatcher in a scrubby thicket in a riparian area. There were apparently two Myiobius flycatchers in the thicket calling, and they soon gave something of a soft song that matches very well a recording that Rich Hoyer made in Brazil of Black-tailed Flycatcher (if that is even the same species there?). Here is a link to Rich’s recording of the odd little soft song –  http://www.xeno-canto.org/5479. We did not get great looks at either bird, but the combination of the habitat and the vocalizations lead us to believe they were much more likely Black-tailed Flycatcher. We didn’t see any of the mouth-watering raptors but we had a great day of birding and would certainly recommend Las Alturas, we would happily return, the birding is excellent and there are some really excellent rarities possible.

Copyright © 2022 Create a free website or blog at WordPress.com.