We have made a handful of fantastic friends in Colombia. During our time in Bogotá, we were fortunate to cross paths with Trevor Ellory, an expat Brit who has been living, guiding and birding in Colombia for years. Most recently, during a few relaxing days in Medellín we finally met up with the very awesome Diego Calderón and Pablo Florez, both of whom have continually helped us with tons of advice on where to find hard birds and current safety for various areas. Thank you very much Trevor, Diego and Pablo! With new friends made and a mountain of up-to-date info from these two guys, we at last had more of a plan of where to go in the Central and Western Andes. Well rested and stuffed with great food, we were ready to hit the road again!

First we spent a morning birding the small reserve La Romera above the Sabaneta neighborhood of Medellín. This site is fairly well-known as the best place to go for two highly restricted regional endemics – Red-bellied Grackle and Yellow-headed Manakin. The reserve is a bit tricky to find, but the folks in Sabaneta all know where it is and can help you out. Pablo and Jurgen’s birdfinding guide has instructions which helped us get on the right track but there are still a couple of turns to make. Google Maps shows the roads correctly part of the way to the reserve, Maps With Me and GPSNav (two alternative mapping applications we use) both show fewer roads that are less accurate in this area. If you use Google maps and route to 6.13884, -75.61202, this should take you past a university complex and to the La Doctorada area (restaurant, residential development and other things carry this name here). Those exact GPS coordinates should get you to a Y in the road, you want to go left (uphill) here. This will take you off the known streets in all mapping applications, but your next turn is at the next possible turn, at 6.13671, -75.60514. If you watch carefully there is a transit stop sign on the left hand side here that says “Las Brisas.” At this Y you want to take the right fork that heads steeply downhill at first. This narrow road will level out and start to ascend again; continue until you see an old concrete pillar on the right that says “LA ROMERA” in fading colored block letters, with a ramshackle little hut behind it. You can barely park here or there is more room a bit further down next to a creek crossing, or again a few hundred meters further up past the creek in a large pullout on the right. The best birding seems to be in the area of the little wet gully just before the LA ROMERA pillar up to and around the next, larger creek crossing where there is room to park on the left. 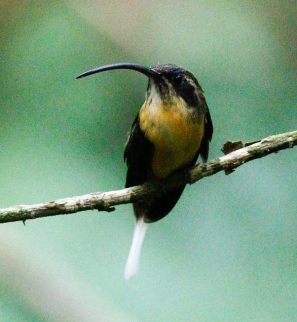 Red-bellied Grackles are common everywhere here, we saw our first one within moments of getting out of the van. We have heard that Yellow-headed Manakins don’t respond to playback, and we have certainly found that many Manakins are at best only occasionally responsive. However, if you work the area focusing on fruiting trees and mixed flocks and with your ears open, the Manakin shouldn’t be too hard; they were vocal on our visit. We found one Yellow-headed Manakin in the first mixed flock we found and then shortly after found a second individual. Stiles’s Tapaculo, another regional endemic, also occurs at this site. We heard one in the gully before the entrance gate/pillar and descended the gully a bit in pursuit. When we were in a good spot we gave a try at playback but it shut up and if it came in it escaped our detection. Odds are these birds here get a fair bit of playback so we let it go at that. However, later, much higher up the road we opportunistically tried another little wet gully and had a pair of Stiles’s Tapaculos come in very close without making a sound, yet again demonstrating that a large part of seeing Tapaculos is keeping your eyes open and not just waiting for them to sing. Probably more than half the Tapaculos we have seen thus far have come in to playback but have done so silently. Species diversity at La Romera is not particularly high but given that this is probably the single best site for two key species, a lot of people will keep coming here and so should you, access is easy and it should only take an hour or three to see the birds. There are some other nice birds around as well; in a late-start, lazy morning we logged Andean Motmot, Tawny-bellied Hermit, Red-headed Barbet, Russet-crowned Warbler, Sickle-winged Guan, White-naped Brush-Finch, Marble-faced Bristle-Tyrant, Greenish Puffleg, Azara’s Spinetail, Black-billed Peppershrike and many other common species (eBird list).

Our next destination was ProAves’s fantastic Chestnut-capped Piha Reserve. We spent 2 ½ days birding the reserve. There is a great trail system that is well signed, which is wonderful especially after some of the bushwhacking and trail guessing we’ve done in our travels! The main trail ascends through a moist gully of primary pre-montane forest before gaining elevation up to a ridge.

Trail at the Chestnut-capped Piha Reserve

The trail then follows the ridge for a long distance before descending again to the main road. Most of the specialty birds can be found on this main trail up to the ridge and perhaps following the first 1 km of the ridge. However, on our visit, we never heard the Piha in this area (though Jose, the reserve manager, told us that he hears it regularly in this area). Not having heard the Piha, we chose to hike the whole loop trail, which paid off as we then found three Chestnut-capped Pihas while descending from the ridge back down to the road. If you do hike the whole loop, there is one unsigned turn on the trail. After following the ridge for several kilometers (perhaps 3 km?), you will come to an obvious fork where there is a ProAves reserve sign and a concrete and pvc pipe post that is numbered 11. At this point you want to descend to the right down the old very deeply worn trail. This trail is a bit slippery in places and at the bottom dumps you out into cutover areas where the trail is a little harder to follow through thick ferns before coming back out to the road (at the road take a right and hike about an hour to get back to the lodge). If you do hike the entire loop, we would recommend asking about the trail condition before doing so as it’s clear that there is very little traffic on the second half of the trail. In general, we had great mixed flocks in the forest and very little activity up on the ridge (though we were on the ridge mid-day). If you can get the Piha without hiking the whole ridge and descending the other side, there isn’t much reason to do so. There are a ton of great species in the reserve; along with amazing point-blank-perched-right-over-the-trail views of Chestnut-capped Piha (of course I didn’t carry my camera that day as it had been raining in the morning), we also found Chestnut-crowned Gnateater, Multicolored Tanager, Purplish-mantled Tanager, Scarlet-and-white Tanager (apparently scarce at this site but we had a pair in an enormous mixed flock), Guira Tanager, White-winged Tanager (seemingly increasingly less common the further south you travel, this species is definitely far more common in areas of Mexico and northern Central America), Ornate Hawk-Eagle, Sooty-headed Wren, Buff-fronted Foliage-Gleaner, Bar-crested Antshrike, Lined Quail-Dove, Black-winged Saltator, Stiles’s Tapaculo, Spotted Barbtail (common), Marble-faced Bristle-Tyrant (common), Rufous-browed Tyrannulet (common – in fact we have never seen this species this common at any other site, we had 1 or 2 in nearly every flock we encountered), Lineated Foliage-Gleaner (never terribly common but this seems like a good site for it, we heard it and saw it daily), Western (Striped) Woodhaunter, Pale-edged Flycatcher, Brown-billed Scythebill, Fulvous-breasted Flatbill, Tyrannine Woodcreeper and Indigo Flowerpiercer. We heard Wattled Guan calling in the pre-dawn but, not surprisingly, didn’t see it! Oddly we did not hear a single Tinamou here, though Highland Tinamou occurs here and is usually quite vocal. There are also records of Black Tinamou in the area but it’s not surprising that we didn’t hear that mega-rarity either! There is a feeder for Chestnut Wood-Quail although they apparently have not been coming to the feeder recently; we didn’t even hear them in our time there. There are Rufous-fronted Wood-Quail in the area as well, so care should be taken recording heard only Wood-Quail! The hummingbird feeders in the garden are swarming with Andean Emeralds, Green-crowned Brilliants, Crowned Woodnymphs and Steely-vented Hummingbirds. We also regularly saw Brown Violetear, Purple-throated Woodstar, Booted Rackettail and White-necked Jacobin on the feeders though not in the huge numbers the other species occur.

About 30-40 minutes walk up the road is a really nice wetland/lagoon with lots of emergent vegetation that is good for rails. We tried one evening and one morning, hearing Blackish Rail and White-throated Crake. There is a tiny wet area just below the lodge that holds Russet-crowned Crake as well but it isn’t very accessible. Tropical Screech-Owl is vocal and was heard from the lodge every night. We spent some quality time in the forest after dark looking for Colombian Screech-Owl, a not very common and pretty local near-endemic species, but struck out. We did hear a distant Stygian Owl and Jose commented that he hears it up on the hillside regularly from the lodge. All things considered beyond the obvious star attraction Chestnut-capped Piha there are a large number of Colombian endemic or near-endemic birds and this is a great site for some generally less common species such as Rufous-browed Tyrannulet, Lineated Foliage-Gleaner, Chestnut-crowned Gnateater, and the number of other just plain great and less common birds here is high, you’re bound to turn up some goodies on any visit.

Getting to the Piha reserve: It’s not too hard to get there on your own. It takes about 4-5 hours from Medellin on a mixture of paved and dirt roads. The dirt roads are in good shape and at current time readily passable in a passenger car. Beware, however, that there are numerous roads that will get you into the general area (Anorí and Amalfi are the two closer towns that are likely to appear on maps), but most mapping applications will try to put you on the much worse roads. The directions in Jurgen and Pablo’s guide are pretty good. You want to leave Medellin towards Puerto Berrio and when you are past Barbosa, turn for Amalfi following the Rio Porce. This is by far the better road to access the area. Just after passing a large reservoir on the river, there is a signed turn for Anorí, turn left here. Making your way to Anorí you will start climbing out of the river canyon and pass a couple turns for hydroelectric projects, stay on the main road. The road turns from dirt to pavement a bit before a village called El Roble (there are a smattering of houses here, a few groupings of which could be called villages. If in doubt, ask if you’re in El Roble yet). Once you’re in El Roble, you are close, the reserve is not far ahead and is well signed with the lodge on the right side of the road and hard to miss! There is not much available out here so stock up in Medellin. Cel signal can be gotten from the lodge with great luck or, more reliably, from the ridge top or by walking/driving about 1 km back downhill from the lodge until you’re just around the corner of the main ridge where signal is good.