After Bellavista, we headed to the Mashpi/Guayabillas/Las Delicias area. The name Masphi applies to two different locations that are reasonably close on a map but are not connected directly by road. What is known among birders as the “Mashpi road” is actually the Las Delicias–Guayabillas Road, where the birding area includes a small side road that forks off and heads a few km to the Mashpi Amagusa Reserve and the entrance gate to the hyper-expensive and closed to the public Mashpi Lodge. The Las Delicias–Guayabillas Road is best accessed from the town of Armenia, via Pacto, Pacto Loma, and on to Las Delicias.

Map of the Mindo area including Mashpi-Amagusa and Mashpi Chocolate

Below Las Delicias are some great patches of forest between about 1400 m and 700 m. As well, the road to the Mashpi Lodge passes through excellent forest that is part of the Mashpi Amagusa Reserve, which has some of the best birding in the area. This area is better referred to as the Las Delicias–Guayabillas road and/or the Mashpi Amagusa road and reserve. The actual town of Mashpi and the Mashpi river, while not too far downhill as the Moss-backed Tanager flies, are actually a solid hour or two away by road. The town and along with it the Mashpi Artisanal Chocolate Farm are accessed by a dead-end dirt road that leaves the Guayabillas–Pachijal road. Mashpi Artisanal Chocolate is owned and operated by local ornithologist Alejandro Solano and his wife Agustina.

Our first stop was the Mashpi Artisanal Chocolate Farm. Alejandro has been a pioneering birder and ornithologist in this area and is largely why the Las Delicias – Guayabillas Road is so well-known to birders. However, at the moment, his chocolate farm has become a hot new destination as they are feeding a Rufous-crowned Antpitta (Gnatpitta). You’ll need to arrive early for a visit (around 6:30-7:00AM). The antpitta (also known as shungita) roams in the forest and can take a while to track down, though once found is reasonably cooperative. We spent several hours (a bit of rain slowed us down) looking until we heard him singing in a far gully. After a bit of tromping around the Rufous-crowned Antpitta was whistled in for some worms where he hung out, a bit shy in the undergrowth, but close and calm for at least a half an hour. While the bird is somewhat tame, it is not on a schedule of showing up on a certain perch at a specific hour, and you are seeing it tucked into the undergrowth deep in the forest. We really enjoyed the experience and did not mind the fact that he was getting a snack.

The forest at Mashpi Chocolate Farm

The forest here is fantastic and we had a nice mix of lowland Chocó birds while we were on the hunt – nice stuff like Purple-throated Fruitcrow, One-colored Becard, Tawny-faced Gnatwren, Russet Antshrike, White-whiskered Puffbird, Blue-whiskered Tanager, Dusky-faced Tanager, White-flanked Antwren, Cinnamon Woodpecker, Black-headed Antthrush. Back in the cacao plantation a few standouts were Maroon-tailed Parakeet, Orange-fronted Barbet, and Little Cuckoo. Alejandro has recorded a good number of rarer Chocó birds, so the forest could be worth additional birding if you have time; among the birds he mentioned were Berlepsch’s Tinamou, Baudo Guan, Indigo-crowned (Purple) Quail-Dove, Brown Wood-Rail, and Yellow-green Chlorospingus. After the magical Pittasoma encounter, we enjoyed a Chocolate tour from Alejandro. The farm is an experiment in sustainable, organic chocolate production and they have a diverse mixture of trees planted with the cacao that benefit both the cacao and biodiversity. When they started the project, they purchased a property as an abandoned pastureland. The pastureland was surveyed and found to support about 40 species of birds. Their cacao plantation, now only five years old, has been surveyed again and found to support approximately 150 species of birds. All this while being fully organic and supporting a family, with only about 5 hectares of cacao in production and the rest of the land conserved as pure forest. Alejandro’s hope is to start educating others in sustainable, organic chocolate production as opposed to the barely productive and wholly unsustainable cattle and cane production that are rampant in the area (as everywhere in the tropical lowlands). And as far as the chocolate goes, it is some of the best we have ever had. Purely organic and local ingredients, no emulsifiers, purely mechanical processing, and the results are absolutely off the charts. Honestly, visiting for just the Anpitta and missing the chocolate would be a huge injustice! To visit, you can contact Alejandro and Agustina via their website or email (jhalezion@gmail.com or agustinaarcos@hotmail.com).

Following this, we visited Mashpi Amagusa, a local reserve along the road to the Mashpi Lodge. Be sure to contact Sergio Basantes ahead of time to arrange a visit (contact information is located on their website). We more or less called on the way, as we were planning on being in the area for a day or two anyways. Sergio lives in Pacto Loma, which is along the way, so we just picked him up and he caught a ride with us to the reserve where he gave us a quick tour. There is someone at the reserve every morning if you do just drop in, but coordinating ahead of time would be much better. This reserve was started by Sergio Bastantes and his family to conserve their land after it had become clear to his parents that their attempts at farming this steep, wet area were in vain. They now protect 130 hectares of forest between about 1700-750 m. The hummingbird feeders attract a great mix of Chocó endemic and otherwise nifty hummers – Empress Brilliant, Violet-tailed Sylph, Brown Inca, the very uncommon Purple-bibbed Whitetip, Velvet-purple Coronet, Green Thorntail, White-whiskered Hermit, along with the more common and widespread Green-crowned Brilliant, Rufous-tailed Hummingbird, Crowned Woodnymph, and Booted Rackettail. As well there are two banana feeders, which notably attract Moss-backed Tanager, Glistening-green Tanager and Rufous-throated Tanager. This area (around 1200-1300 m on the Las Delicias–Guayabillas road), and specifically Mashpi Amagusa and their feeders, are the single best place to see the very local Moss-backed Tanager within its very small range. Birding along the road is excellent, and there are three trails that are also very productive. A short trail parallels the road and leads to the second banana feeder (the one that attracts the Moss-backed Tanager). This is a very new trail but looks promising, and we heard a close Plain-backed Antpitta along this trail as well as Black Solitaire.  Two other trails descend to the creek, and while it is possible to follow the creek to connect the two, that is essentially an off-trail adventure and we never quite found the connection. The two trails down leave from the same location, the “main” trail descends to the left, the secondary trail to the right and ends up further down canyon. The birding is fantastic on the way down to the river. Following the “main” trail, about 2/3 of the way down to the river the trail follows a small ridge with views downhill on either side. This area is known as a territory for the rare (particularly in Ecuador) Chocó Vireo, though given that this may be the only truly staked out territory for this bird anywhere, great care should be exercised with the use of playback. For us, the vireo was in the very uppermost canopies of the ridgetop trees, but not moving around too much, and singing non-stop, so it was more a question of patience and neck-craning to track down a view. While in this area we had an enormous mixed flock that included a pair of rare and local Rufous-brown Solitaire. With patience we got good looks, photos, and Kathi managed a not too bad recording. Also in the flock were Pacific Flatbill, Chocó (Golden-bellied) Warbler, Spotted Woodcreeper, Golden-olive Woodpecker, Lineated and Scaly-throated Foliage-Gleaners, Olive-striped Flycatcher, Moss-backed, Rufous-throated and Glistening-green Tanagers, Rufous-rumped Antwren, Orange-breasted Fruiteater, Golden-winged Manakin, Yellow-collared Chlorophonia, Slaty-capped and Tawny-breasted Flycatcher, Marble-faced Bristle-Tyrant, Buffy Tuftedcheek, and about 10 more common species that we were able to identify, however we felt like we missed many other species in the enormous flock! 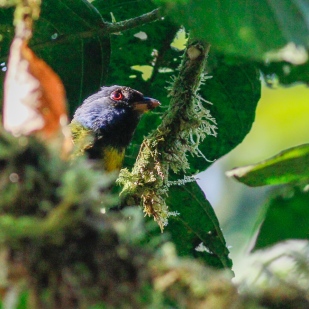 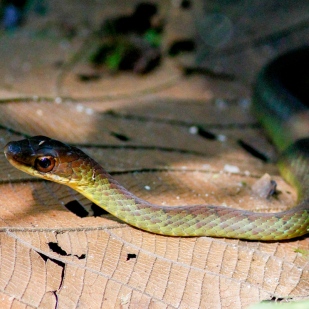 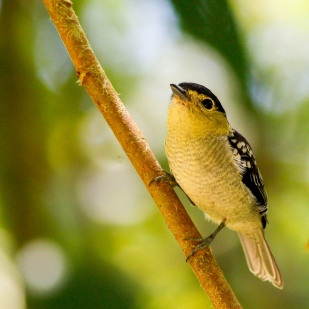 Other good birds along the trail included Orange-crested Flycatcher, Tricolored Brushfinch, Rufous-breasted Antthrush, Esmeraldas Antbird, Zeledon’s Antbird, and Wedge-billed Hummingbird. From the parking area, we had a super close flyover Barred Hawk, surprisingly the first we have seen since Costa Rica! There are records of Rufous-crowned Antpitta from this site as well. The birding here is really off-the-charts excellent and we wish we could have stayed another day or two to explore more. There is no accommodation, yet, at the reserve, but Sergio can help you arrange to stay at a basic but decent hotel in Pacto, or you can readily camp in the parking lot as we did; there are restrooms at the reserve. Between the Moss-backed Tanager, Chocó Vireo, Rufous-brown Solitaire, Purple-bibbed Whitetip fairly guaranteed at the feeders, and with possibilities for a lot more Chocó endemics, this site really is a top destination in the area and should become a staple in the NW Ecuador birding circuit!