The Antisana Ecological Reserve can easily be reached via a day trip from Quito. Given the frequent afternoon weather, it is best to arrive early in the morning to improve your chances of having an unobstructed view of the massive peak of Antisana. Antisana rises to a height of 18,891 ft (5,758 m) and is absolutely stunning! Outside of the views, the birding is also excellent.

Antisana is essentially THE place to see the threatened Ecuadorian population of Black-faced Ibis. Although this species has not been officially split from the Black-faced Ibis which occurs throughout the Andes from Peru to Argentina, this population exists in isolation in the high Andes in Ecuador. As soon as we arrived in the flat open valley with Antisana looming above us we spotted 8 Andean Black-faced Ibis right next to the road. We had amazing looks from the van, though they snuck into taller grass before we could dig out the camera. In this same area Carunculated Caracaras fill the grasslands like herds of cattle, seriously they are everywhere! We counted 52 Carunculated Caracaras and I bet our count was low! Andean Gulls join the Caracaras on the grasslands as well. It still seems strange to me to see a gull at such high elevations, but they don’t seem to mind at all!

Antisana is also a great place to go looking for the Ecuadorian Hillstar, Black-winged Ground-Dove, Silvery Grebe, and Andean Condor. We came across two female Ecuadorian Hillstars (very nearly endemic to Ecuador with a small handful of records from southernmost Colombia) along the road up to the park. The first place to check for the hummingbird is 3 km after the second checkpoint at a concrete bridge. There is a small trail that parallels the creek here. Check the hillside for flowering Chuquiragua bushes.

Chuquiragua, a favorite of the Ecuadorian Hillstar

Along the creek we also saw Black-winged Ground-Dove and Stout-billed Cinclodes (both Stout-billed and Chestnut-winged Cinclodes species are in the park but Stout-billed was more numerous). We also saw one female Ecuadorian Hillstar at the abandoned house on the right side of the road as you head further into the park. Silvery Grebes can be seen on the lake just past the final checkpoint and parking area. To get a view of the lake and the grebes walk down the road to the first trail junction before the road heads uphill. After a short distance on the trail you can get good views of the lake although a spotting scope is needed to see the grebes from the trail. Look for the Silvery Grebes along the shoreline. Andean Condors can be seen soaring around Antisana and Jocotoco’s Antisanilla Reserve.  A new nest was just discovered along the cliffs in Antisanilla and they estimate that at least 30 individuals call the reserve home. Watching the massive Andean Condors soar is just incredible! I don’t think I will ever get tired of seeing them.

Before reaching the park entrance you will also want to make a quick stop at the Tambo Condor Restaurant (-0.459139, -78.323218). A Giant Hummingbird makes regular visits to the feeder here. Talk about a big hummingbird! The hummingbird feeder appears tiny next to that huge guy!

If you go: You no longer need a permit to visit the site and a 2-wheel drive vehicle can reach the park without problems (only a short section of the road is unpaved). At one of the checkpoints you will be asked to sign in but no permit is needed and it is free to visit the park.

Papallacta Pass is a high elevation birding region east of Quito along highway E28. I’ve read in trip reports before that if you like rain you should come here and indeed when we were there it was wet, windy, and very cold! Our first stop was the radio antenna road at the pass (-0.3204429, -78.1923251). This is the place to search for the Rufous-bellied Seedsnipe, Andean Snipe, Red-rumped Bush-Tyrant, and Blue-mantled Thornbill. When we arrived rain was blowing sideways and it was freezing cold. A little hesitant to head out birding in such inclement weather we decided to head down to the town of Papallacta and hope for a break in the weather. The road appears to terminate at the Papallacta Hotsprings, but if you drive through the complex, the road actually continues into the Cayambe-Coca Ecological Reserve. The road is closed to public traffic a few km past the hotsprings at a ranger station, but the area around and just below this ranger station is probably the best place in South America to look for the rare Masked Mountain-Tanager and the Black-backed Bush Tanager. We headed up late in the afternoon looking for a place to spend the night. Along the road I saw a hummingbird perched so I asked Josh to stop. The hummingbird turned out to be a Shinning Sunbeam but in the neighboring bush was a perched Masked Mountain-Tanager! We knew this was a great place to look for the Mountain-Tanager but we never thought we would see it this quickly! Wow! What a good-looking bird! 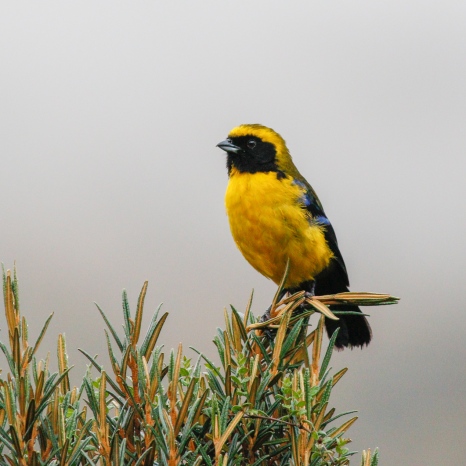 We camped along the roadside below the ranger station without incident and woke up early to look for our last remaining target; the Black-backed Bush Tanager. We walked the road past the ranger station searching for flocks in between bouts of rain. We ran into a nice mixed-flock with Black-backed Bush Tanagers in tow and two more Masked Mountain-Tanagers! Incredible! The road is a bit rough but should be passable in most cars with care. If you are looking for Black-backed Bush-Tanagers or Masked Mountain-Tanagers then this is the place to go!

Since we saw our targets so quickly along the hotsprings road we decided to head back up to the radio antenna road and hope for better weather. When we arrived it was still miserable, with blowing rain and very poor visibility. However, this time we decided to gear up and tough it out! We parked at the towers and found the trail that heads down the hill. We were told that the there is a flat meadow area after the towers and that this area is the place for the Rufous-bellied Seedsnipe. 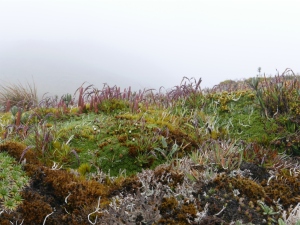 Given that we could hardly see we had no idea where to find this little flat area. We followed the muddy trail blindly down the hill and found the flat area but we couldn’t see more than 10 meters in front of us. We wandered around the area hoping to flush a Seedsnipe and at least get a glimpse of it flying away. Josh flushed a family of Andean Snipes and despite the fog and rain we got pretty good looks at them. We split up for a bit to maximize our chances of seeing the Seedsnipe. Not too much later, I saw the faintest large object move in the blowing fog in front of me. I called Josh over and we snuck closer to two Rufous-bellied Seedsnipes! I never thought we would see these guys given the conditions, but a little determination paid off! After we enjoyed pretty good views of the Seedsnipes we headed back to the van and down the hill to soak in the Papallacata Hotsprings. Now that is what I call a good reward. The hotsprings are very nice and worth a stop and a stay if you are birding in the area. If you do visit, don’t be disappointed by the not-quite-hot-enough water in the big pool. There are actually about six pools and the higher up in the complex you go the hotter the pools get.

Still on the lookout for the Red-rumped Bush-Tyrant, we birded along the old road that parallels the highway west of and at the pass. We birded the upper part of the road closest to the pass more extensively. This road forks off of the radio antenna road and heads back downhill (west) towards Quito. Near the pass area we spent a couple of hours scanning bush after bush and it paid off! We had one Red-rumped Bush-Tyrant perched on a bush alongside the road, and later saw another in flight. The old road is also supposed to be a good place for the Giant Conebill in the remnant patches of polylepis forest. The patches that are left are quite small and we did not hear or see any Giant Conebills but there are plenty of reports of them in the area. We stopped in a small remnant forest patch (-0.28568, -78.24633) to look for the conebill but instead found a Curve-billed Tinamou walking down the road! Curve-billed Tinamous are incredibly hard to see and pretty much the only way people actually see the tinamou is pure luck. Thankfully our luck has not run out! No Giant Conebill but a Curve-billed Tinamou! I’ll take that!

2 Comments on Birding Antisana and the Papallacta pass area