Cerro Blanco is right on the edge of the bustling city of Guayaquil and can be easily reached via public transportation. Several trails head up into the forest from the visitor center and camping area. We spent two nights camped here while exploring the area. We birded the entry road, the shorter trails around the visitor center as well as the longer and steeper Higueron trail. The shorter trails near the visitor center are good for Elegant Crescentchest, Pale-browed Tinamou, Collared Antshrike, Fasciated Wren, White-tailed Jay, and Black-capped Sparrow (eBird list). The Pale-browed Tinamou is certainly the easiest Tinamou I have ever seen. As soon as we got out of the van, we heard the tinamou calling. Josh walked over to the edge of the forest and within 15 seconds said “I have it.” Within 30 seconds we both got good looks at this guy walking in the understory. Never has a tinamou been that easy to see, and I fear that never again will one be so easy!

The Higueron Trail heads further up into the forest passing giant fig trees and provides access to more intact dry tropical forest. Along this trail we had Ochre-bellied Dove, Ecuadorian Piculet, Gray-and-gold Warbler, Black-capped Sparrow, and best of all Gray-capped Cuckoo! Despite the fact that that Gray-capped Cuckoos are theoretically expanding due to deforestation, the cuckoo is still hard to find and Cerro Blanco may be one of the best places to look for this species. About half way up the Higueron Trail we stopped to catch our breath for a bit and while listening for activity we heard the call we had studied so well. We both looked at each other and said “Cuckoo!” and began searching. After about 10 minutes of searching we finally saw a little bit of movement and found the Gray-capped Cuckoo. Despite misty, drizzly conditions we both managed to get good looks at what would certainly be the prize of the day (eBird list).

Jocotoco’s Rio Ayampe Reserve is best known for the Esmeraldas Woodstar, an endangered hummingbird that is known from fewer than 15 sites along Ecuador’s coast. Rio Ayampe provides critical habitat for this endangered hummingbird and other species who rely on tropical semi-humid forests, a habitat that is rapidly being lost. The Esmeraldas Woodstar can be found at Rio Ayampe only during the wetter months (generally from late December – April). Outside of this period it is still unknown where the Woodstar goes.

We were lucky enough to show up the day before the reserve guards were to conduct a survey of the reserve. We happily joined them for the full-day survey and saw loads of good birds (eBird list) including three Esmeraldas Woodstars, two Short-tailed Woodstar (another uncommon woodstar of the dry coastal zones of Ecuador and Peru), Superciliated Wren, Ochre-bellied Dove, and Ecuadorian Trogon. We also learned probably our most favorite bird song interpretation of all time. Byron and Renee told us that the male Rufous-headed Chachalacas say “Pega tres” followed quickly by the females who say “Dos no mas”. “Pega tres, dos no mas” (roughly translates to “Let’s have three. Two! No more” in reference to having babies) rang from the forest all day long and we chuckled every time. 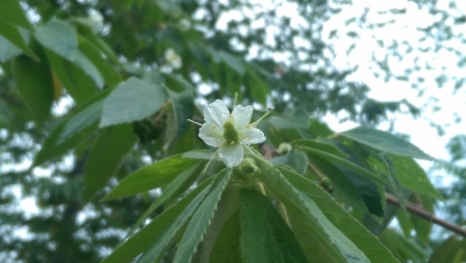 Muntingia calabura a favorite of the Esmeraldas Woodstar 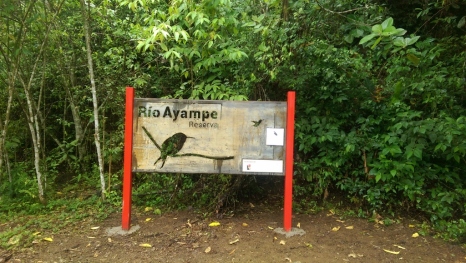 If you are looking for the Esmeraldas Woodstar the key to finding them is to find their preferred flower. They can be found foraging on a small tree with white flowers called Muntingia calabura, a type of cherry. Once we knew what to look for we found these flowers in several places along the road, especially on scrubby hillsides.

Because the birding was so good on the first day (96 species) we decided to bird the area again the following day to look for a few more specialties. Even with such a good show the day before we still managed to see a few more new birds including Henna-hooded Foliage-Gleaner and Little Woodstar (eBird list).

The birding at Rio Ayampe is along a seldom traveled road that cuts through the reserve, which makes for easy walking and easy birding, a welcome relief! Access is from the south side of the Rio Ayampe bridge. Anyone in town can point you in the right direction. There are plenty of basic accommodations available in the small village of Rio Ayampe, and Byron, one of the Jocotoco reserve managers, runs nice, quiet cabanas and a restaurant called Wipeout a couple of kilometers north of Ayampe in the small village of Las Tunas.

Another spot worth visiting is Machalilla National Park and Los Frailes Beach. Los Frailes beach is billed as one of the most beautiful beaches in all of Ecuador and I’d have to say I agree, as do hundreds of other locals, so try to avoid weekends if you are planning a visit. 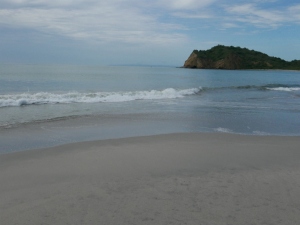 We stopped in on a busy weekend for an hour to take in the view and see what other species we could turn up. In our short visit we saw Crimson-breasted Finch, Peruvian Pelican, West Peruvian Dove, and Collared Warbling-Finch among others, though we were honestly more enjoying the beach.

Heading further south from Rio Ayampe the landscape starts to get drier and scrubbier, somewhat reminiscent of acacia and cactus laden deserts in southwestern USA. Here in the drier region of Ecuador and Peru, often referred to as the Tumbes region, numerous specialties await such as Gray-and-white Flycatcher, Short-tailed Field Tyrant, Parrot-billed Seedeater, and many more. Atahualpa, a small town a few kilometers off the coastal highway is a great place to go looking for some of the Tumbes specialties.

Birding is done from the road that passes through Atahualpa on the way to Santa Elena. We found that the best birding was southwest of town. Southwest of town we found several dirt tracks that lead to oil platforms and oil pipelines that were great for birding; no traffic, few fences, and more space for birding. We ran into one of the guards that monitors the area and he told us that we were free to bird in the area. Along the dirt tracks we quickly found Parrot-billed Seedeater, Short-tailed Field Tyrant, Necklaced Spinetail, Tumbes (Mouse-colored) Tyrannulet, and White-tailed Jay. Long-tailed Mockingbirds and Peruvian Meadowlarks are at plague levels around here. After spending nearly a month in the Amazon we were thrilled to have new birds practically falling into our laps. Many of the specialties are fairly easy to see, no neck craning needed. Desert birding does have its advantages! We also came across a pair of White-edged Orioles a species that is more difficult to find further north in the more humid forest. Still looking for Gray-and-White Tyrannulet we hit the books to learn more about its habitat preferences. After reading our field guides we concentrated more on washes and we soon found the Gray-and-White Tyrannulet (see complete list here).

While in the area we also decided to do a bit of exploring to look for the nomadic Sulphur-throated Finch and Band-tailed Sierra-Finch (which oddly has a population in the dry coastal scrub). Sulphur-throated Finch is one bird that we know so very little about. Maybe it is because no one pays attention to little brown jobs, but this species clearly deserves more attention and conservation, especially considering its small range within the Tumbes region of Ecuador and Peru. We found a few eBird records for the Sulphur-throated finch that were tagged near Engunga so we took a detour from the main highway toward Engunga. The habitat along this nearly untraveled dirt road is excellent! Despite the late afternoon heat we had Necklaced Spinetail, Tawny-crowned Pygmy-Tyrant (at plague levels), Collared Warbling-Finch, White-edged Orioles, and more (eBird list). We continued to follow the road all the way down the coast, stopping periodically in barren patches to check for the Sulphur-throated Finch and Band-tailed Sierra-Finch. We had a nice show of 3 Band-tailed Sierra Finches but no Sulphur-throated Finches. 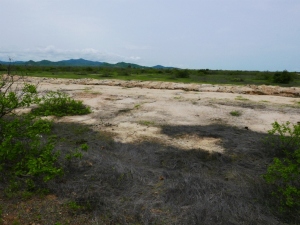 We planned to make a loop back to the coastal highway but little did we know the road doesn’t really  make a loop and the faint track looked fairly impassable in the muddy wet season, so we had to back-track the way we came. The road connecting Engunga to the main highway passes over a low coastal range, just a few hundred meters high, but with somewhat taller deciduous forest at the top. On our way back we stopped at the pass to make an iced tea. While we were waiting for the tea to brew Josh stepped outside to have a look around. He came back to the van and said “I think I might be crazy, but I swear I hear Black-and-White Tanager”. I got out of the van to take a listen and sure enough in the distance I could hear the unique song of the Black-and-White Tanager. Black-and-White Tanagers breed in coastal desert scrub during the rainy season (generally Feb. – May) and, somewhat bizarrely, migrate over the Andes to spend their non-breeding season in the Amazon where they seemingly disappear, as very few records exist of this bird outside of the breeding season. Given how hard this bird is to encounter we abandoned our tea, threw on our rubber boots, and started bush-whacking up the hill. After 20 minutes or so of picking our away between thorny bushes, we neared the top of the hill where we quickly found one male Black-and-White Tanager singing his little heart out. What a cool bird! And super crazy that this bird spends his non-breeding season in the Amazon and breeds in dry coastal scrub! Birds are cool!

Copyright © 2022 Create a free website or blog at WordPress.com.